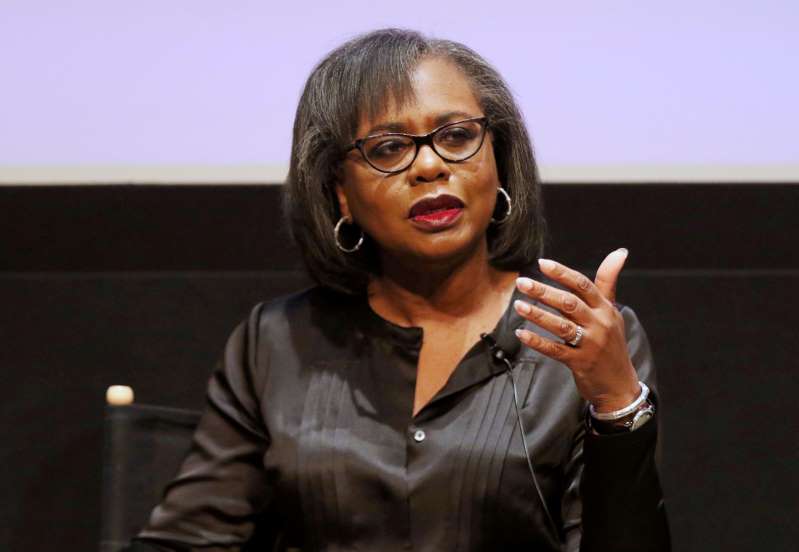 Anita Hill hopes Christine Blasey Ford gets more of a fair hearing before the Senate Judiciary Committee than she did 27 years ago.
“There is no way to redo 1991, but there are ways to do better,” the Brandeis University professor wrote in a New York Times op-ed Tuesday.

Like Ford, Hill reluctantly came forward with allegations of sexual misconduct against a Supreme Court nominee (in Hill’s case, it was Clarence Thomas, who went on to be confirmed). And like Ford, Hill was asked to testify about her allegations before senators.
“It’s impossible to miss the parallels between the Kavanaugh confirmation hearing of 2018 and the 1991 confirmation hearing for Justice Clarence Thomas,” Hill wrote. “In 1991, the Senate Judiciary Committee had an opportunity to demonstrate its appreciation for both the seriousness of sexual harassment claims and the need for public confidence in the character of a nominee to the Supreme Court.
“It failed on both counts.”
Hill’s op-ed comes after Ford stepped forward publicly with her allegations against Kavanaugh over the weekend. Ford will testify next week before the Judiciary Committee.
Hill notes that “some of the same members as nearly three decades ago” still sit on that committee and that it “still lacks a protocol for vetting sexual harassment and assault claims that surface during a confirmation hearing.”
She said that shows “the committee has learned little from the Thomas hearing, much less the more recent #MeToo movement.”
Hill cautioned that the committee must “serve as fact-finders” and “should not be used to destroy the lives of witnesses who are called to testify.”
To that end, Hill makes several recommendations to the committee:
“Refrain from pitting the public interest in confronting sexual harassment against the need for a fair confirmation hearing. Our interest in the integrity of the Supreme Court and in eliminating sexual misconduct, especially in our public institutions, are entirely compatible,” she said.
“Select a neutral investigative body with experience in sexual misconduct cases that will investigate the incident in question and present its findings to the committee,” she said. “The investigators’ report should frame the hearing, not politics or myths about sexual assault.”
“Do not rush these hearings,” she said. “That the committee plans to hold a hearing this coming Monday is discouraging. Simply put, a week’s preparation is not enough time for meaningful inquiry into very serious charges.”
“Finally, refer to Christine Blasey Ford by her name. She was once anonymous, but no longer is. Dr. Blasey is not simply ‘Judge Kavanaugh’s accuser.’ Dr. Blasey is a human being with a life of her own. She deserves the respect of being addressed and treated as a whole person,” she said.

One Response to "Senators ‘failed’ in 1991, Anita Hill says. But she thinks they can do better this time"